Will Ethiopia digitalize its Monuments?

We of Misrak Kirs use all the means we can master, all the time and effort we are capable of to promote and save heritage in Ethiopia, along the new Extended east Route, and not only.

One of our members, Meftuh Shash Abubaker, from Toronto, Canada, has indicated we could apply to acquire the new 3D laserscan technology developed by Ben Kacyra and his teams.

So here we come, convinced not only we will win the competitive bid amongst a number of potential applicants worldwide, but that we will provide Ethiopian Heritage a new, powerful tool for cultural tourism promotion.

The best way to defend and promote our heritage is in our hands, let us carry on the good, necessary job.

To the CyARK 500 Advisory Council.

Our association has the pleasure, feeling it a task of importance to us, to submit two sites for the evaluation of Your project.

We have been conducting, as members of Misrak Kirs, a series of surveys of the new interborder tourist Extended East Route, covering around 3,000 kms in Ethiopia, Somaliland and Djibouti and introduced remote sensing for Archeaology to our Country, Ethiopia, with the purpose of producing detailed resource mapping.

1) The first site we propose You is the Goze Mosque, in the Amhara regional State of the Federal Republic of Ethiopia.

It is the oldest original standing, largely unmodified mosque known in Ethiopia.

It has never been excavated or dated, while comparison with similar mosques, all at least partly collapsed, suggest different datings from the 13th to the 15th century.

We acclude an academic paper on the site, that mentions also other Ifat mosques.

Goze is unique and rather well preserved, yet it stands a number of risks of grave degradation we will further discuss. It is the only standing integre and original medieval mosque in Ethiopia

All archaeological and historic sites are placed, in Ethiopia, under the jurisdiction of the ARCCH, Federal Authority for the Research and Conservation of Cultural Heritage.

We have preventatively informed their present General Manager, Ato Yonas, of this present proposal.

We work in close relationship with the Authority and under their direct control.

The Authority has the exclusive power to authorize studies of any kind on Ethiopian territory, on cultural resources.

Risk for the site can be assessed evaluating the state of similar mosques, all collapsed, and the fact that the roof is leaking onto an instable ancient wood ceiling and that the area is prone to continuous light seismic activity, not of the most destructive sort.

We repute the presence of a limited number of faithful will avoid its utter demolition, of the sort we have observed for the Ahmud town in near Somaliland, or for example of this Tower near Addis Ababa, our capital town.

Very few medieval mosques stand as they were, unmodified and redesigned, in the whole world, not just at this unique Ethiopian mountain top site.

The merit of this single operation, digitalizing the mosque and any othet annex stands in its worth, less than five chilometres as the bird flies from the main road to Djibouti, along a tourist route easily presented as the alternative to the classic North of Lalibela, lake Tana and Axum, in a context of Ethiopian tourism, ever increasing characterized by Arab and Muslim visitors.

2) The Kundudo and its surrounding valleys, Misrak Hararge, Oromia, an elegant 3,000 m flat top mountain are a concentrate of archaeological, speleological and naturalistic marvels.

The area has been recently proposed for the constitution of one of the Country's first local parks, or Community Conservation Areas. 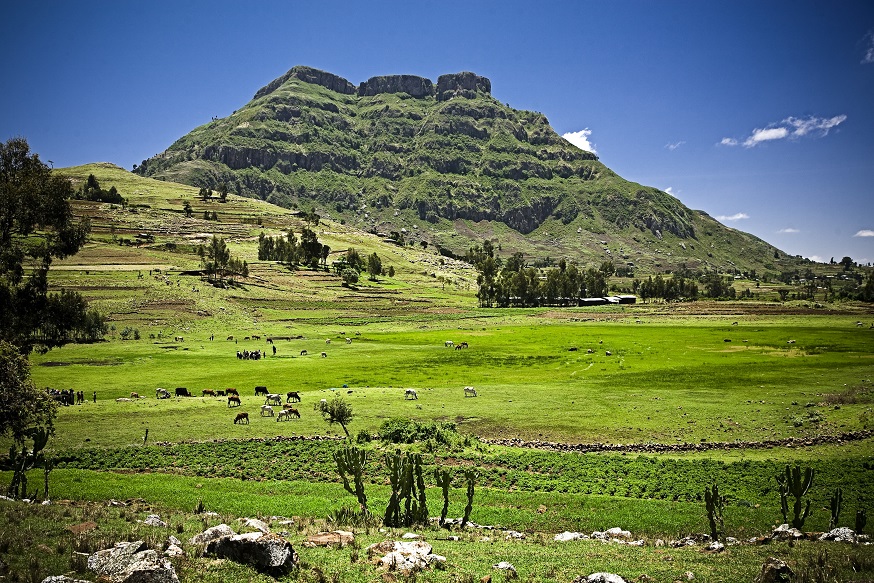 We propose scanning, in a limited area, what is Ethiopia's best rock painting site, first published by Misrak Kirs in 2010, Goda Rorisso, a granitic underrock, as well as Dagga Gala, and Saka Sharif, nearby rock paintings sites known since longer, and the best tract of the Gursum Pearl, a real speleological marvel. All stand in close sight of the Kundudo mountain, a few kilometres from one another.

The proposed Kundudo park is a main feature of the mentioned tour route, the EER, Misrak Kirs has done the resource mapping for tourism in the area, for the competent Ministry, first, since 2008.

As mentioned, here too ARCCH, our direct supervisors, are in charge of permissions and man made monuments as a whole, local Oromia authorities will instead authorize the Cave scanning.

Rock painting sites are not rare in Ethiopia.

Unfortunately, all those tourists have had access to have been all by destroyed in a matter of years, very recently. This video shows a prominent foreign journalist, evidently uninformed, witness undisturbed the washing to exhaustion of a fine painting, for the sole scope of a not particularly well filmed image! In other instances, simple vandalism has disposed of them, as in the case of the Kundudo main town, Gursum, Stinico East site. 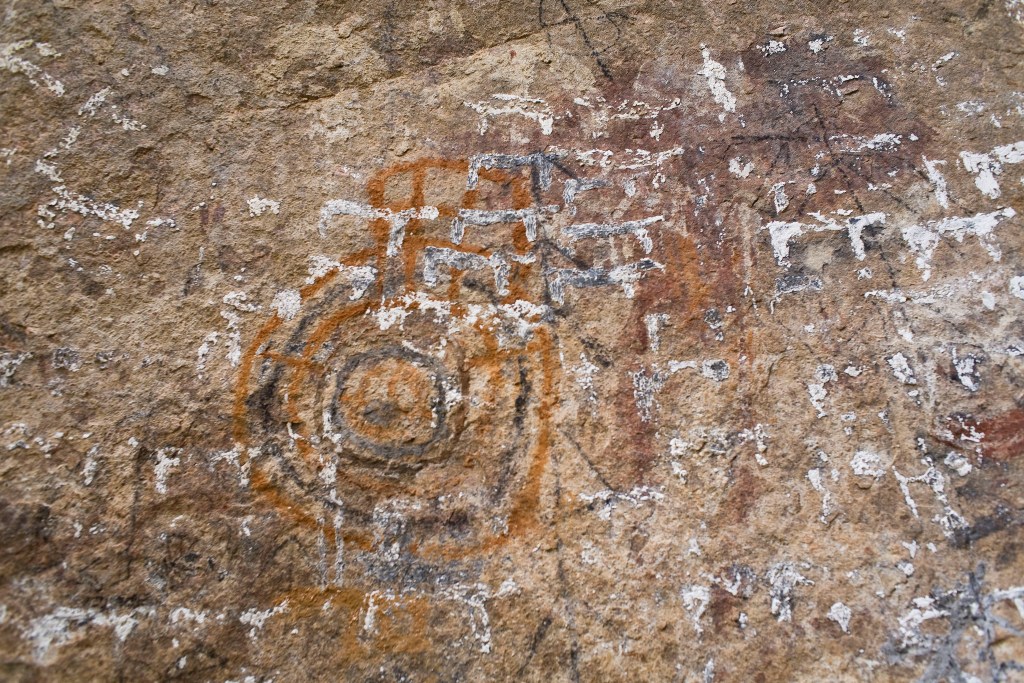 Part of the Goda Rorisso paintings, a spiral represents, to Dr. Bachechi, the local community

As to the very delicate features in the Gursum pearl cave, uneasy access has not prevented some pisolites or cave pearls from being taken and a number of speleothems or rock formation from being smashed.

Mastering the 3D laser scans technology would mean us being capable to select and scan from over four hundred known rock hewn churches, none ever digitalized in any form, over two hundred caves, newly discovered by our teams in Hararge region alone. And eighty three main rock painting caves and underrocks, of which a good half hitherto unknown to science.

All the latter caves and rock paintings sites are along the newly proposed Extended East Route interborder tourism route of Eastern Ethiopia, Somaliland and Djibouti.

We are powerless witnesses to the destruction of the best of them, in Ethiopia.

Digitalizing them will not only permit an eventual restoration work after human inflicted damage, but will permit, globally, the promotion they need.

We are convinced the new technology will assist vitally Ethiopians in promoting local and international cultural tourism, ultimately, the sole way to preserve a totally singular, articulated, ancient, and sadly otherwise irreplacable heritage.

Misrak Kirs has been engaged for years in Cultural Heritage presevation here, our competent members have done so in some noted cases all their professional lives through. We will provide competent personnell to the missions, capable to replicate the scans, we have dedicated technicians and students amongst us.

There is no fund available so far in the Country for digital preservation of cultural artefacts, though for example one of our nearest collaborators, Abdella Cherif of the Harar Private Cherif Museum has received funds to digitalize Harari music and audio recorded events and culture.

We have indications that the acquisition of the technology will favour the destination of monetary resources for the digitalization of a number of monuments at the expenditure of both the Ministry of Culture and Tourism and local entrepreneurs and Corporations.

1. An academic paper on the Goze and Faqi Dabbis Mosques.

2. A second paper with the only archeological sounding of the medieval Ifat mosques in the area.

3. A number of photoes of the proposed sites.

1. A video of the Goze mosque.

The interviewee, Seid Hassen, is one of our association members.

4. Acta of a Symposium on the Extended East Route: http://www.academia.edu/3560314/The_Extended_East_Route._Ethiopia_Somaliland_Somalia_and_Djiboutis_Interborder_sustainable_tourism_innovation._Proceedings_of_the_Harar_International_Symposium

5. A first pictorial guide to the Extended East Route:

Oops, you forgot something.

The words you entered did not match the given text. Please try again.

Over the years of independence, the institute has trained more than 13000 physicians (including 800 clinical interns, 1116 masters, 200 postgraduates and 20 doctoral students) in various directions.

The institute has been training medical staff on the following faculties and directions: Therapeutic, Pediatric, Dentistry, Professional Education, Preventive Medicine, Pharmacy, High Nursing Affair and Physicians??â ¢ Advanced Training. At present] 3110 students have been studying at the institute (1331 at the Therapeutic faculty, 1009 at the Pediatric, 358 at the Dentistry, 175 students at the Professional Education Direction, 49 at the faculty of Pharmacy, 71 at the Direction of Preventive Medicine, 117 ones study at the Direction of High Nursing Affair).

The clinic of the institute numbers 700 seats and equipped with modern diagnostic and treating instrumentations: MRT, MSCT, Scanning USI, Laparoscopic Center and others.

There are all opportunities to carry out sophisticated educational process and research work at the institute.

Reply Jamosficle
8:20 PM on June 3, 2021
You definitely made your point.
https://paperwritingservicestops.com/
length of college essay
cpm homework help
college essay art
how to write a thesis statement
freedom writers movie essay
mathematics homework help
need help to write an essay
custom writing
how to write an essay about yourself for college
good thesis statement
custom made essays
cpm homework
writing an introduction for an essay
https://contest101.webs.com/apps/guestbook/

Reply Jamosficle
10:15 PM on June 4, 2021
With thanks. Useful information!
https://freeessayfinder.com/
how to write a proper essay
dissertations
writing an argumentative essay powerpoint
custom essay writing services
how to write a good argument essay
help writing thesis
how to write a college scholarship essay
essay writing services review
short college essays
doctoral dissertations
what should a college essay be about
homework
how can i write an essay
https://contest101.webs.com/apps/guestbook/

Reply Jamosficle
6:18 AM on June 10, 2021
Thanks a lot! Lots of data!
https://freeessayfinder.com/
how can write essay
https://essayssolution.com/
college application essay services
https://bestessayseducationusa.com/
college essay quotes
https://ouressays.com/
how to write an introductory paragraph for an essay
https://eddie-z.webs.com/apps/guestbook/

Reply Jamosficle
9:36 AM on June 12, 2021
Lovely postings. Thank you!
https://quality-essays.com/
how to write an application essay for high school
https://essayextra.com/
how to write an essay for kids
https://bestessayscloud.com/
high school versus college essay
https://bestessayseducationusa.com/
steps to write an argumentative essay
https://fkbuducnostbanovici47.webs.com/apps/blog/show/42259202-po
bjeda-buducnosti-i-jos-jedan-gol-kapitena-muhameda-mujica

Start a Free Blog at Webs.com