A brief project proposal to promote the conservation of a singular natural wealth in Ambo town, within the campus of a blooming University compound.

Ambo town, now over 50,000 inhabitants, has been a trade gate to wilder west expanses since medieval Ethiopia and a prominent town during the Fascist occupation; it was then endowed with two forts, a post office and a major road. It probably first developed as a village around a natural bridge. 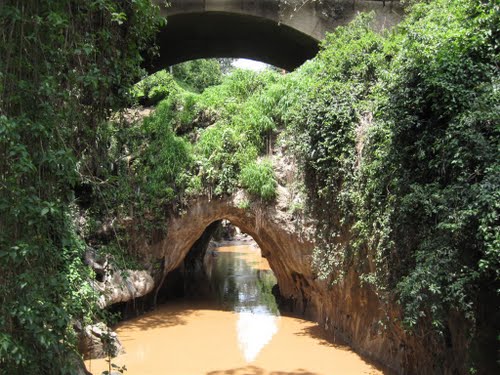 The natural bridge around which firstly Ambo developed

I count amongst my personal acquaintances sig. Paola del Ponte, daughter of the del Ponte, a Swiss Italian, who first developed mineral water and sodas in Ambo. Her family story is simple, yet inspiring, her personal experience reduced to child memories and the certainty that an auction sale of vast land in town, including the whole of today’s Ethiopia Hotel enabled her and a big family to study and survive hard times in post war Italy.

Since that early 20th century is Ambo noted for her spa, her water and as a favourite Imperial Residence.

A specific heritage capital few African towns as a whole could ever rival.

Ambo is the siege of a noted senior secondary school, the one of poet Tzegaye Gebremedin, and of one of Ethiopia’s fastest growing University Campus, these five last years.

A Special Fall, right in the best place

Teltelle is a mostly unknown, yet very interesting powerful waterfall off a cliff of basic, mafic dark basalts incorporating a cave. 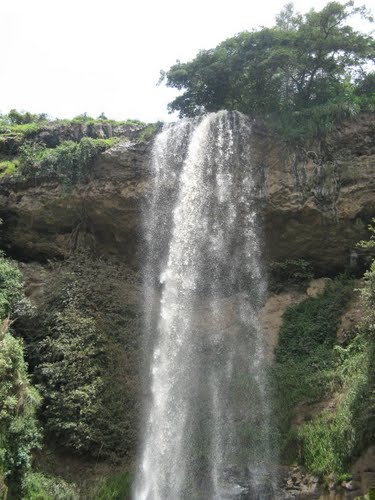 As I saw it today, at the height of the dry season, it is obviously much richer and impressive than the most noted Guderfall just 4 kms along the Nekemte road.

Guder fall is a noted local tourism spot, visited regularly by visitors reaching Wenchi crater lake via Ambo.   A cheap, proper and wooded hotel marks and protects there the spot from abuse, while I noted with regret today that a local Oromo peasant is building a sized compound for himself under the falls, spoiling both local views and natural environment. 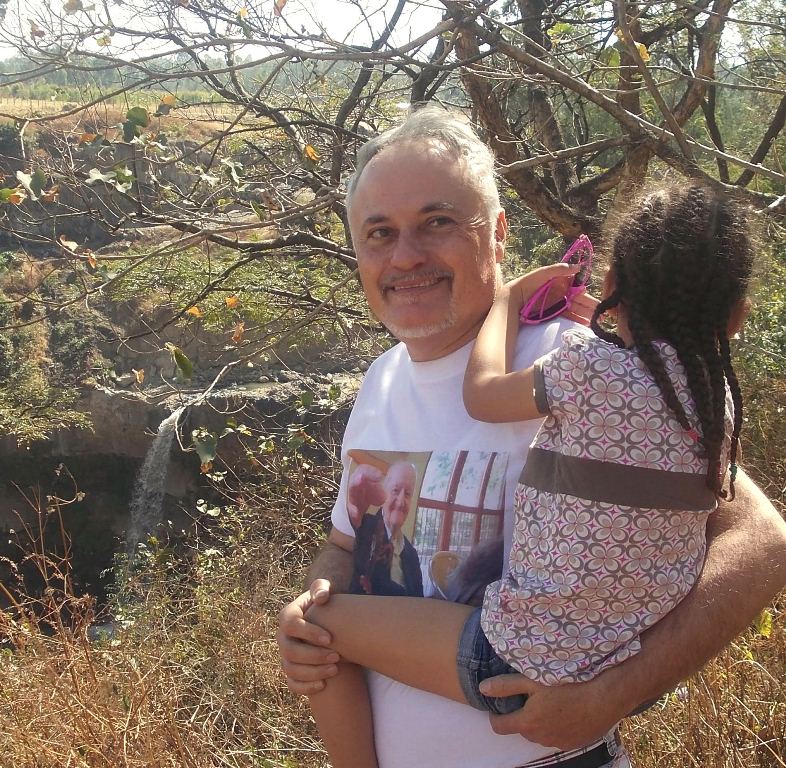 No fall access from the campus, yet here are the best view points

Teltelle is, though much more conveniently placed, practically unreachable and in a rather pitiful state. Do not misinterpret me, the water is flowing freely and largely uncontaminated, but the whereabouts are not presently conducive to a visit, and deserve uncostly rapid attention. The worst is signaled by the complete felling of the forest and shrub once engulfing the river.

The best access road by far is within the Ambo University campus -another access road is suited only for four wheel cars- at the end of the campus tarmac just 300m or less lead to an access point of obvious vantage: the best all season view point.

Piles of earth and some gravel deposits on the right temporarily spoil the access environment on the right side, sadly not only there is no indication to the falls, but the best viewing area has been transformed in a sort of open air toilet presumably by students and there is no comfortable access to the view points, no way to descend approaching the fall.

Right opposite, on the town side, dozens of locals are illega 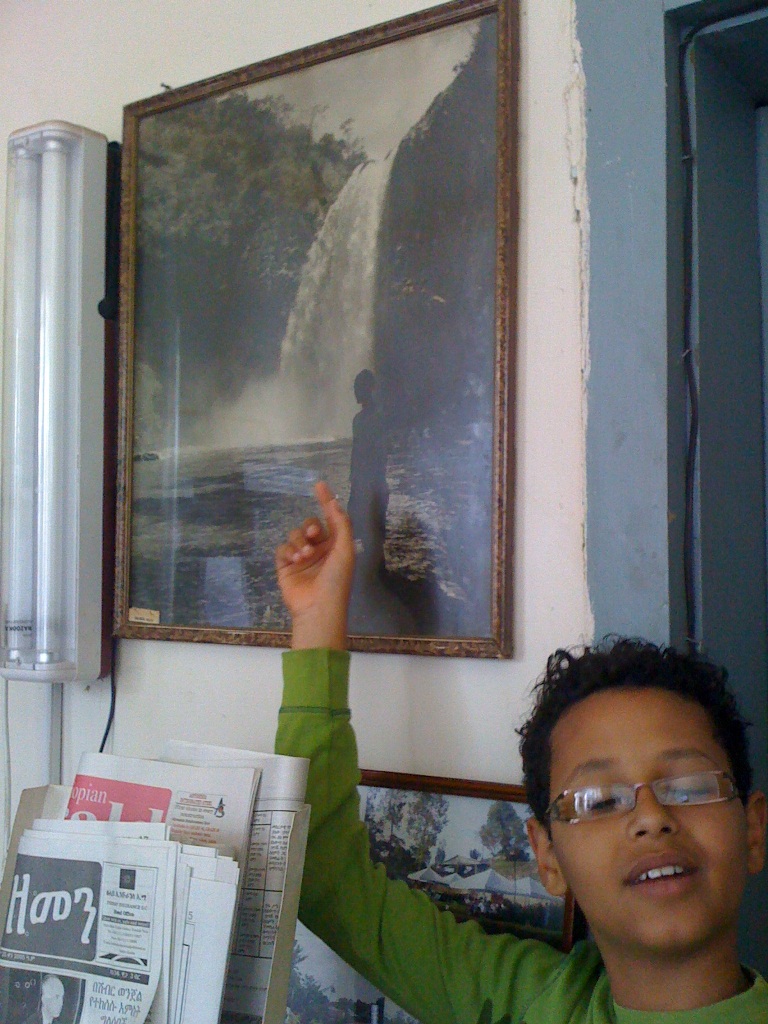 An approximately 45 years old photo, before all... change started.

What the area could become

The proposed local  monument should be preserved, cleaned, marked and defined at the town and Oromia federal State level as a Community Conservation Area, as present legislation encourages.

-a simple treespecies botanic garden on the west banks, on the campus south east border,

-a track from the same area to the falls base, including two or more viewpoints, with safetybarriers,

-a café at the start of the track,

-more circuits for trekking in the Huluka and Guder valleys, possibly on mountain bike too,

-indicate some river tracts for potential rafting or kajak use,

-a seminatural pool for swimming, below the falls,

The main task appears, in any case, replanting widely in the valley, for at least 400 m belowthe cliff, on both sides. The University side is much less spoiled, on the opposite side quarrying should be immediately controlled. 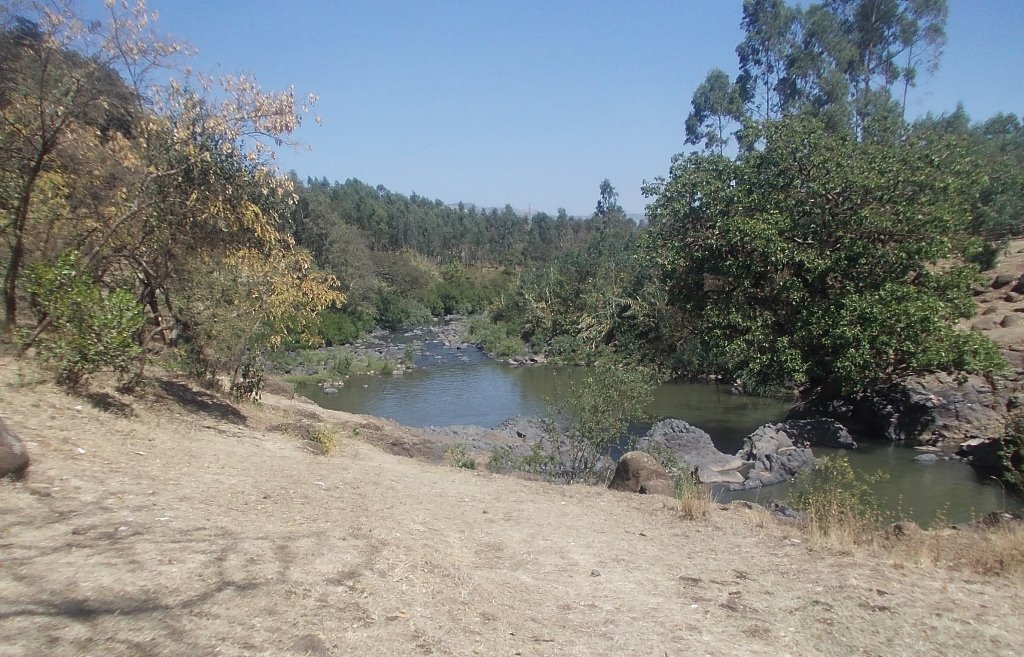 A tract suited for rafting or canoeing 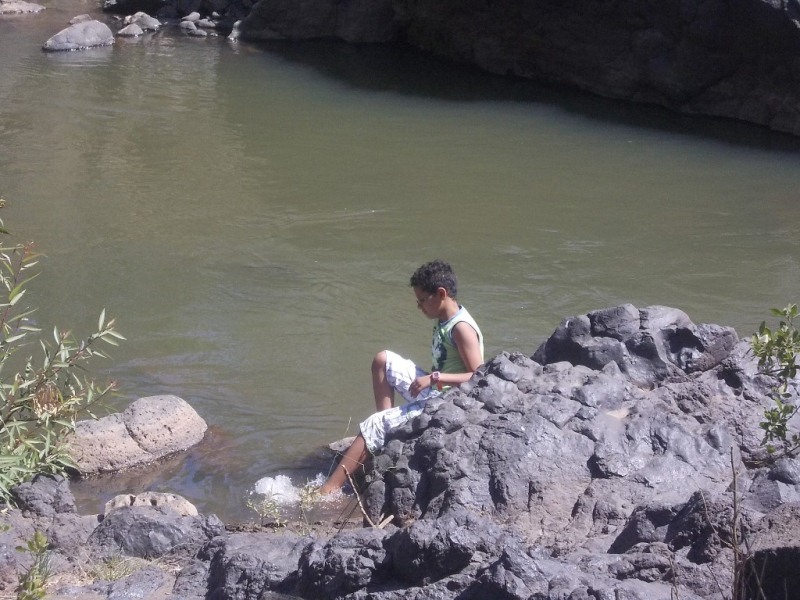 Manage a natural pond for swimming?

Actions on the University Campus

The area, once managed with very little investment indeed, could become a well visited park producing revenue for the Institution.

The falls could well be the symbol of the Campus. A common action should stimulate further thinking and planning, a new action:

The area, particularly the small track leading to a viewpoint, must be cleaned putting indications forbidding its use as a toilet. A communal cleaning action will foster a first, much needed beginning of a sense of ownership and participation.

Leaps of earthand different materials in the leveled and whereabouts should be leveled and managed. Soon many will feel involved, avoiding at the roots further environment degradation.

Then the track and the barriers will be designed, prepared  installed, developing some small areas for safe viewing.

Suited original trees, widely available at very limited cost include Weyra (Olea africana) Wanza (Cordia spp.) Warka and Shola (Ficus vasta et spp.) Podocarpus gracilis and lesser shrubs locally present already. Foreign species may include some Casuarina and flowering shrubs, like Poinsettia. Planting on both sides should be initiated by students, involving local town dwellers. The project should be presented not only to town planners but, for example, to Ambo’s well organized traders’ association. The imperative basalt quarry closure should be operated in steps, starting from the area closer to the falls. And should be accompanied by well prepared educational sessions to let people understand the advantages of restoring this amazing tract of valley. A subject for pedagogy students, for local secondary school teachers, matter of interest and possibly dissertations by social science and management students.

A Park as an educational process

A park only becomes viable through the interest of local users. The presence of external visitors can increase revenue and sense of ownership. This local conservation area is conceived to be designed elicited and physically realized by teachers, pupils and locals in collaboration with the relevant town authorities.

Builders and topographers will design the track and eventual small wooden bridges, natural scientists will devise replanting, preparing a circuit in the proposed original trees and shrubs botanical garden, management students could oversee the cafeteria business development while law, social studies or other will assist in involving the local authorities and the town community.

Art and music students and teachers should from the word start devise uses and promotion ofthe Monument, including any innovative feat as ‘son and lumiere’ in evening events, retro illuminating the fall, using adjacent spaces for exhibits or child entertainment. This latter is visibly totally absent in town.

The café could have an open space for the younger, possibly serve as a base for mountain bike rental, eventually horse trekking could be organized in the area. The income generating activities need to be calibrated to local needs and pockets first,with Addis Ababa visitors in mind too. A more ambitious project could include a miniature water park for the young: next to a bettered river pool, a couple of slides, inflatables on rent.

The best parks are invariably the result of intelligent action and reflection, spurned most often by a creative and practical person or a well integrated community, very, very rarely indeed the product of administrative planning.

A visionary, or some… useful fool produces the idea, if he or people with him have the charisma to involve those around, any environmental action rapidly becomes a practical paradigm: an action, a park, often to be successfully repeated in the area.

A park within a campus can be a very clear cut, groundbreaking, useful income generating project; rather, it can become a communal goal.

For sure, in itself the idea evidently allows turning to practice a few otherwise blatantly theoretical subjects related to builders, naturalists, architects, planners, social scientists and management students.

The falls park as an open practical class within our campus, integrating town, nature, development and our subject studies.

Oops, you forgot something.

The words you entered did not match the given text. Please try again.

Start a Free Blog at Webs.com